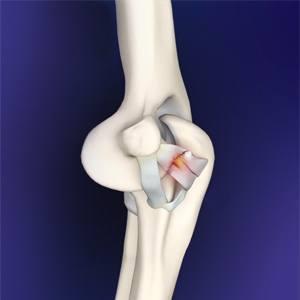 The elbow joint also has the attachment of the common flexor and common extensor tendons. The groups of muscle, associated with the respective tendons, assist in rotational movement of the forearm as well as the movements of the wrist and hand.

The common conditions affecting the tendons around the elbow joint include tennis elbow and golfer’s elbow which result from an overuse injury to the tendons or result from repetitive activities such as sports, mechanical activities or weight lifting.

The ligaments around the elbow may be injured secondary to a sprain, rupture, trauma or any accident. The sprain or trauma may result from repetitive stress, overuse or a direct injury.

The common symptoms of injury to the elbow joint and its surrounding structures include swelling and pain, which may extend from the elbow to the forearm and palm and be aggravated by movements of the wrist. Sometimes instability of the joint may also be seen.

The repair of the damaged tendon is broadly classified into two types- tendon debridement and tendon release.

This procedure is commonly used in for the management of tendinitis. In this procedure the surgeon removes any damaged tissue from the tendon and cleans the tendon.

It is the most commonly used surgery for tendon repair. In this procedure the surgeon locates the attachment of the extensor or flexor tendon on the elbow and splits the damaged tendon as well as removes the scar tissue or other overgrowth, around the tendon. Sometimes the loose end of the tendon may be sutured to the surrounding connective tissue (fascia).

Ligament reconstruction is considered in patients with ligament rupture. Your surgeon will make an incision over the elbow. Care is taken to move muscles, tendons and nerves out of the way. The donor tendon is harvested from either the forearm or below the knee. Your surgeon drills holes into the bones of the upper arm and the forearm, around the elbow joint. The donor tendon is inserted through the drilled holes in a pattern similar to that of the original ligament complex. The tendon is then attached to the bone surfaces with special sutures. The incision is closed with sutures and covered with sterile dressings. A splint is applied to support the elbow for a few weeks. After the surgery, you might be advised for regular follow-up and also for a rehabilitation program for a better and quicker recovery.

Common complications of the elbow ligament and tendon repair surgeries include infection, injury to the adjacent nerve and blood vessels, and a loss of strength or flexibility of the elbow joint.

The success of the surgery depends on the post-operative rehabilitation program which includes the use of a removable splint immediately after surgery as well as ice therapy, electrical stimulation and massage for reducing pain, swelling or muscle spasm. Isometric exercises, strengthening and range of motion exercises may be useful for long term rehabilitation.

Arthroscopy of the Knee Joint

Arthroscopic Reconstruction of the Knee for Ligament Injuries

Office Hours
Get in touch